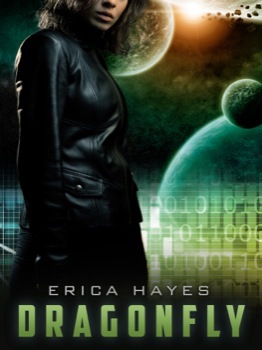 I don’t often blog about book recommendations – heck, I barely blog at all these days – but I’m so freaking excited about Dragonfly by Erica Hayes. It is exactly what I want in my science fiction romance reads. I’m extremely picky when it comes to this genre. I’ve read so many SFR’s that start well but then they just totally lose me, and even the ones that I like are sometimes missing that X factor – the unidentifiable thing that makes me want to run around shoving copies of the book into everyone’s arms.

DRAGONFLY had that thing I’m always looking for. It was everything I wanted it to be. Military sci-fi with a capable, kickass heroine, and a smart, gorgeous rebel hero. If you guys like Aren from my books, you’ll love Dragonfly (that’s the hero’s code name). He has all the sexy smiles and he’s very, very good at his job, something that definitely puts him at the top of the hotness scale for me.

So, what is the book about? It’s told from first person POV. Carrie is the heroine, and she’s basically a black ops operative who finally gets the chance to kill the rebel scum who murdered her fiance. Of course, that rebel scum turns out to be Dragonfly, and he’s not what she expected. But she has to put aside his gorgeous looks and his personality that seems to be in conflict with what she’s read in his file, and she has to get close to him so that she can figure out what his big, evil plan is.

The book has lots of cool guns and gadgets, and a very awesome anti-theft concept. Erica Hayes didn’t skimp on the world building, but it’s very easy to follow and understand, even for people like me who did everything possible to avoid science classes in high school and college.

There is something that makes me sad about this book. It’s the fact that I’ve heard virtually nothing about this book. I came across it because I follow Sharon Fisher, author of GHOST PLANET (another SFR that I enjoyed this year), and saw that she added it to her to-read list on Goodreads. On a whim, I clicked over and read the sample pages. The sample pages made me set aside the other book I was reading and purchase DRAGONFLY immediately. I had so much trouble putting it down – NOT a good thing when you’re behind on a deadline.

But as I was saying, this book doesn’t seem to be getting hardly any attention, which is a shame because it’s fantastic. The perfect blend of science fiction, action, and romance, and I really want the book to do well. SFR is a tiny subgenre that I think can explode. It has everything that I love about urban fantasy, but instead of magic and curses and potions, it has guns and spaceships and awesome technology.

I really hope you guys will give it a try. If you do, let me know how you like it.