It’s an Awesome Time to be a Reader

Watch the video. It’s exciting! Five years ago, it would have been impossible to turn a book into a good, well produced, and widely distributed TV series outside of Hollywood, but Kickstarter and enthusiastic fans have made it possible. It’s an awesome time to be a reader… and a writer! We don’t have to depend on Hollywood anymore to get what we want.

I can’t wait to see the Morganville project! I’ve already backed it. It’s one of two kickstarters I’ve supported this month. The other one is The Name of the Wind Playing Cards  Yep. Another book-related kickstarter. The whole concept of that website is cool. A lot of people contributing a little can make some great things happen.

I hope this project gets funded! If you’re a fan of the series, or of Rachel Caine (who’s so, so sweet and smart!), or of books in general, check out the kickstarter. You can contribute as little as a $1.00. Every little bit helps, especially spreading the news of the kickstarter.

Have any of you contributed to a kickstarter before? If so, which ones? 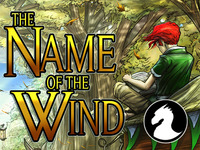 P.S. When is someone going to start a Firefly Kickstarter?

P. P. S. I know I said in my last newsletter I was shutting down the blog for a while. (Didn’t receive my newsletter? You can sign up here.) I guess my “while” was super short!